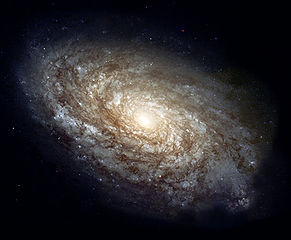 Amateur science philosopher claims he has solved the mysterty of dark matter and also discovered another dimension of the universe that science has been ignoring for over 100 years.
Scientists invented dark matter to account for the additional mass needed to keep the galaxies from flying apart. Rather then additional matter that cannot be seen or even shown to exist, this article advocates that a body's mass varys with it energy level relative to absolute space, its "space energy level". A body's "space energy level" rises as its mass increases - this is what we perceive as the dark matter. There is not additional unseen dark matter - it is only that matter becomes more massive as its energy level relative to absolute space increases. This is just high school physics. As a force is exerted on an accelerating body, the body requires more and more force to keep it accelerating at the same rate. In other words it is getting more massive as its energy level rises relative to (absolute) space.

Inertial Mass  -  "When a force is exerted on a proton in a particle accelerator the particle accelerates to a higher velocity relative to other matter. (This is a vector value, it has motion and direction as represented in Newton's F=MA relationship). At the same time the force also elevates the particle to a higher mass/energy level relative to space itself. This is a scalar energy, relative to space itself, it has no direction nor motion. A body always has these two forms of energy (motion/energy and mass/energy). This mass/energy is another dimension of the universe that was discovered by Michelson-Morley's experiment in 1887 but was ignored as too improbable by science. Nothing moves relative to absolute space - this is the mass/energy dimension of the universe!

Instead the scientists went along with Einstein's, Fitzgerald's ideas which have become the standard model of 20th century of physics and cosmology. Newton did not realize the importance of the (M) inertial mass in his F=MA equation which was also rising by an extremely minute amount. Newton did not know about this extremely important part of his equation that did not become apparent until it was discovered with the advent of the cyclotron experiments.

This higher energy level relative to space (space energy level) is perceived as an increase in the (inertial) mass of the particle. The more force that is exerted on the particle, the more massive it becomes. At low velocities, this mass increase is very minute BUT since extremely tiny mass/energy increase affects the timing of the atomic clock's in the GPS statellites it has become very important. A small increase it the mass/energy of the satellite's clocks affects their time keeping and they become out of sync. with the GPS ground clocks and so must be constantly adjusted back into sync.

A particle moving at one-fifth the speed of light, for example, gains only two percent over its original "rest" mass. But at higher velocities that are easily attained in large cyclotrons, the inertial mass increase can become very large." This holds true whether the particles are whirling around in a cyclotron or traveling as part of a star in a spiral galaxy.

Inertial mass (M) is a prime factor in Newton's Law of Gravitation:

Scientists sometime confuse this change of inertial mass with time dilation. "By synchronizing two atomic clocks, then flying one for extended amounts of time in an airplane and comparing its time reading with the stationary clock, scientists have discovered a dilation of a few millionths of a second for the airborne clock." They thought they had witnessed time dilation. Actually what had happened was that the acceleration of the plane throughout the flight had raised the inertial mass of the clock in the airplane very slightly causing the discrepency in the synchronization of the clocks. They had in effect, witnessed an experiment using the absolute frame reference of the airborne clock's, space energy level. The acceleration of the airplane had effected its inertial mass, relative to absolute space.

Since gravity is much stronger due to the greater velocities of the stars and higher space energy level in the outlying area of spiral galaxies, there is no need for "dark matter" to hold the outlying stars in place. This is also why stars are created in the outlying area of the galaxies. The gravitational attraction force is stronger at this higher space energy level, therefore the gravity of the protostars becomes strong enough to produce the energy for fusion to take place and the proto stars to ignite into new born stars.

Scientists invented dark matter to account for the additional mass needed to keep the galaxies from flying apart. Rather then additional mass that cannot be seen or even shown to exist, this paper advocates a stronger inertial mass that will do the job using Newton's and Einstein's mathematical relationships. Dark matter is simply ordinary matter at a much higher energy level relative to absolute space.

Don Hamilton, author of "The Mind of Mankind" http://novan.com/mind.htm

Part 1. The Power of Human Imagination - Its Origins and Accomplishments.
Part 2. New concepts in Cosmology, Physics, and Astronomy.

The Two Energies of Matter

A New Cosmology for the 21st Century