The Supernatural World of Human Imagination 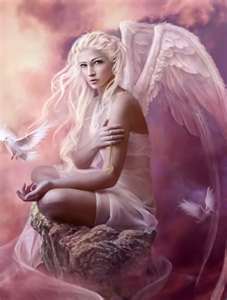 Between 70,000 to 100,000 thousand years ago a strange new being living in south Africa began to leave an indelible mark on our planet. New tools and artifacts designed with aesthetic beauty began to appear. Later, beautiful art was painted on cave walls and probably a lot of other places that did not survive the ages. This is hard evidence that a radical new being was beginning to make its presence known on Earth. Human beings endowed with a new powerful creative imagination had evolved and were now living on the planet.

Modern man's powerful imagination has allowed mankind to 'see' the world in an entirely new light. It was if a curtain had parted that allowed people to see a vast new world that they could never have comprehended before. Imagination is an innate part of human nature, it sets humans apart from all other animals of the planet. Other animals have a learning imagination but very little or no creative imagination. They learn from their parents and experience but they do not progress. Lions and tigers, gorillas, etc. are doing the same things now that they did thousands of years ago. They may be able to adapt but they do not progress. They can not fanatize (a most human attribute).

Human Imagination gives humans the ability to visualize images and ideas within their mind. To be creative!, to invent new technology, to create complex languages that can communicate abstract ideas with other people, to explain everything they encountered (even though most of the time it was incorrect). To discover the laws of nature, to create stories, myths, religions, laws, everything it takes to create a myriad of; cultures, traditions and civilizations.

Creative imagination, an incredible power, gave people the power to progress from a primitive form of living existence to the highly complex technological civilization we have today. Human imagination gave us the power to become aware of the wonders of the Universe!

Mankind, throughout its existence, has created many gods to explain the mysteries that people have encountered in their lives. The god of lightning, the god of war, the god of love, etc.. In modern times most of the gods have been eliminated as the real cause of this phenomena have been discovered and satisfactorily explained.

However beyond the realm of the natural lies the vast realm of the supernatural - fantasy, myths, metaphysics, religions, philosophy, etc. This is where the fertile imagination of the storytellers lead us. Into the vast wonderful world of fantasy, where imaginary stories, myths, religions take us far away from the world of reality into worlds where only our imagination can exist.

Most people think to imagine simply means to fantasize or daydream but this powerful mental ability means much more then that. 'Human Imagination' is the ability to mentally visualize abstract ideas and concepts and to associate this mental power with vocal sounds and writing. Any mental activity that requires a visualization within the mind is a form of imagination. All humans possess this amazing power in various strengths.

Some aspects of imagination are: to create, to reason, to speculate, to pretend, inspiration, to associate, to perceive, to comprehend, to think, to philosophize, to understand, to learn, to ponder, to memorize, to analyze, to wonder, to conceive an idea, a concept, etc.. Human imagination gives us the power to create stories, novels, myths, fables, angels, devils, gods, magic, goblins, faeries, etc. Imagination is the vital part of human nature that can open many worlds where reality has no business being.

Human Imagination has allowed Mankind to explore secret worlds of nature that had never been seen before by any creature on our planet. Invention of the telescope opened up the astonishing worlds of astronomy and cosmology while the microscope revealed the secret worlds of the microbes, molecules and atoms.

Human imagination has allowed humans to speculate about their own creation and to begin to control their own destiny. With the advent of imagination, the "Homo Sapiens" species was 'transformed' into
the "Homo Imaginative Sapiens" species. Everything mankind has accomplished, throughout its existence, is a result of its powerful imagination.

Human imagination created the 'MIND' of mankind. The ability of people to build upon the ideas of others no matter where or when the original idea took place. Issac Newton once said, "If I have been able to 'see' further then others it is because I stand on the shoulders of giants". He built his ideas on the ideas of creative thinkers who came before him. That is the way the 'MIND' of mankind works in every endeavor that it undertakes. Inventions and concepts are created, and then improved upon by other 'MINDs'. Just look at the Wright bother's first airplane for instance. The tremendous amount of imagination it took to progress from that first airplane to the airplanes of today. That goes for just about everything mankind undertakes.

One of the largest industries in our country is the motion picture industry. This multibillion dollar industry is built almost entirely on imagination plus alot of hard work and capital. The author must create a story, the screenwriter must adapt the story to a movie script, the director must direct the movie the way he imagines it in his mind. The actors must imagine that they are the character they are playing. The whole endeavor is just one big imagining event. People using their imaginations to their fullest capacity. I just saw the movie "Finding Neverland" which was about the creation of "Peter Pan" a successful fantasy play that has been running for over 100 years.

Human imagination has allowed mankind's creative geniuses to create words, languages and stories that explain everything humans encounter whether or not the stories and concepts are real or imaginary. Human Imagination is our only contact with the supernatural, there could be no heaven or hell, devils or gods without this powerful trait.

The rich legacies of the Greek philosophers, ancient mythologies, Gaelic and Nordic faeires, etc., would not exist without human imagination nor would the great religions of the world. The abstract world of mathematics or the scientific method of thinking would not be possible without this remarkable ability. Human Imagination is the undisputed power behind all human endeavor. It created the " Mind" of mankind, the vast network of human minds of the past and present that are able to communicate across time and distance. Imagination made the amazing human adventure possible.

Humankind creates things that nature cannot. The "Homo Imaginative Sapiens" species is an extension of nature's ability to create. Ever since the onset of Human Imagination, when the Homo Sapiens became creative throughout its history - curious people have used their imaginative power to explain all the mysterious phenomena that they continually encountered and thoroughly puzzled them.

From the time of Babylonians, Egyptians, Jews, Aztecs, etc. down through history, storytellers have created stories, myths, Gods, etc. to explain the mysteries they encountered. These stories and myths may have little or no physical basis but were an essential part of these ancient cultures. Some of these stories and myths have evolved into the great religions of today.

It is only in the past few centuries that the imaginative people have begun basing their theories on physical evidence that they have gathered (this is the scientific method) rather then speculation and superstition. This has given humans the insight to began to understand the true nature of the mysterious phenomena that governs the universe. Mankind has begun to come up with better explanations for the mysterious phenomena that they continually encounter in their lives. They no longer depend on gods and myths to explain this phenomena.

These new theories have enabled humans to begin to understand the phenomena and discover mathematical relationships that guides matter, energy and life within the universe. They now have many theories to guide them in their quest for the true reality. They are slowly discovering the physical laws and relationships of nature (gravity, inertia, chemistry, biology, quantum mechanics, etc.).

Ancient faerie traditions are not a part of reality, they are a pure form of creative imagining, a special niche in the vast world of human imagination. The participants in faerie festivities are acting out their own fantasies as an exercise in fun and frivolity. Letting their imagination take over to see where it takes them. Their benefit is the enjoyment of the festivities. Human recreation is made up of a vast array of fascinating activities created by imaginative innovators for people to enjoy. Just doing something for the sheer enjoyment it brings.

Storytelling is probably one of the oldest and most enduring forms of human recreation. Ever since people learned how to talk, imaginative storytellers have spun their tales around the campfire. Just to let your imagination take over and enjoy the occasion - it is a basic human activity. This recreational storytelling has evolved into all types of literature; novels, plays, movies, lectures, etc. but it also still survives in its most ancient enjoyable form. Spinning tales of ancient myths and Faerie folklore around a campfire.

by Donald L. Hamilton © - author of "The MIND of Mankind: Human Imagination the source of Mankind's tremendous power!" ISBN 0964926512

Imagination - The Power that makes us Human!
Plus - New concepts in Cosmology, Physics, and Astronomy.